Megatron vs. Optimus on the highway of Malaysia 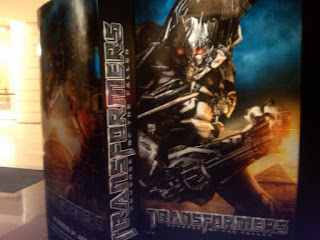 Where art thou, Megatron?
This is what my wife hopes to see everytime she is stuck on the infamous Malaysian highway, especially if it was bad. I mean, an hour an inch is bad. Real bad. Especially if you are trying to chase your timesheet at the office at 9am or better yet, those who are chasing an appointment.
Traffic jam is a fact of life in big cities, the whole world over. They say in Asian cities like Jakarta and Bangkok, it was even worse. The problem is, I am always at these cities on holidays and my experience does not give a fair view of the morning drive situation there. I bet, if I do work there, I may think that it is just another daily routine. 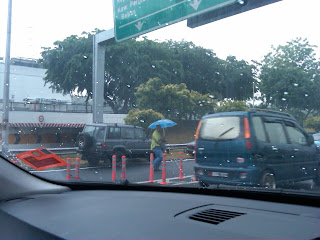 A car by the roadside can even cause a traffic jam

As I own my own business, I am rarely caught in traffic jam but when I do need to get somewhere fast, I will be cursing whatever causing the jam.
That is why when you passed the place where the jam started to ease and see that at that point, there is no credible explanation (like Optimus fighting Megatron) to explain why there was a jam in the first place, it fustrate you. I know and use radio (nowadays Twitter) to keep track of jams around town but usually, it will be over by the time you reached the place where the jam was supposed to be. By that time, either you have been stuck there for quite some times or you never know whether there was a jam or not as you have paid and used a toll road to get to your appointment.
Just another cost of living which you have to take into account to live in a city like Kuala Lumpur.

p/s - On another note, watched Transformers : Revenge of the  Fallen, just now and they still fight on streets which would have cause one hell of a jam if it ever happens
Posted by Unknown at 11:59 PM

In my country, people from outside like to think of my city as a bad place, but we are mostly lucky about traffic jams. Our traffic usually flows smoothly, but I've been in a few traffic jams.

Ratty - Lucky you! I live in that kind of city once...

Lisa - You do seem to have this problem everytime I read your blog. Sorry to hear it...