How to be patriotic

Some just join the army or the navy or whatever profession which allow you to shoot the enemy. No two ways about it. If this is not patriotic, I don't know what is. Some might not be brave or dumb enough, depending on how you see it but there are a lot of ways to be patriotic. This month of August is Malaysia's Independence Day. Much like any other country, we celebrate it like it was 1999. Fireworks. Countdowns. Parade. Roadblocks. Demonstrations. The usual.
Anyway, this year, as fate has it, our Independence Day or Merdeka in Malay which is well-known among Malaysians, fall on the month of Ramadhan. That means, most of those who want to be out celebrating will be denied the permission to be part of a celebration which has now known more for its mayhem and traffic jam. Religion plays a big reason for the subdued celebration as Ramadhan is a month of reflection for Muslims who are a big part of this country in more ways than one.
So, a few people who can be said to be creative and entreprising have decided there are ways to celebrate without seeming to be disrespectful to the holy month. I have been promoting their works and plans for the past few weeks and here is another post with the same intention. Promoting them.
1) The 15Malaysia short films project - Read about this P1 Wimax and Pete Teo's project by 15 directors from Malaysia in this post titled 15Malaysia is not enough but it is a great start. There are still 10 films to be released and I have reviewed the first 3 in this post titled The 1st 3 of 15Malaysia. This is one way of being patriotic but it is expensive and all you can do is watch. Or maybe spread the message across. Go to their website at 15Malaysia.com.
2) The Random Alphabet's Merdeka Train Party - Here is an inexpensive way to show your patriotism. Join some other patriots and decorate a coach on a train. Kuala Lumpur has so many of them. Take your pick from the Komuter, the Monorail, the LRT or the Rapid KL. I took a liberty to take a picture of one of them today which you can see below. All are public transport which runs on tracks. All have coaches. You will be assigned a specific location on the day itself and then you will be tasked with decorating a coachlike the second picture below. Get yourself invited at Open Invitation to the Merdeka Train Party. 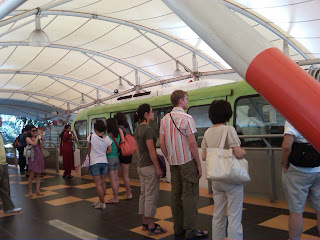 People waiting for a Monorail while it was arriving 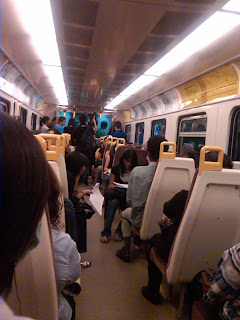 The inside of a Komuter and imagine the party you can have in it
These are just 2 ways of people showing their patriotism creatively. How did yours go?
Posted by Unknown at 11:59 PM