Inside Intel to see #WhatIsInside 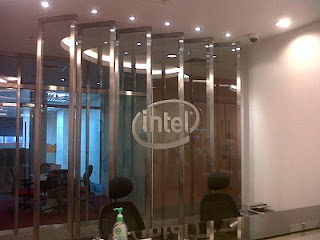 I was invited by Cynthia Seow of P1 Wimax on Wednesday the 23rd of June to see something her company P1 Wimax is going to unveil on 29th of June 2010. Most of the social media community has been buzzing for quite some time about a campaign by P1 Wimax, a subsidiary of the public listed company, Green Packet Berhad. Those who were invited to the event were given a 6-days lead time to get the feel of what will be unveiled on 29th June but there were a few things which were held back to ensure there are still stories to be told next Tuesday. 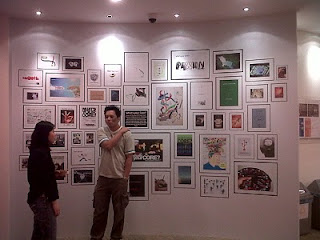 We were shown Intel Malaysia office which is full with so many 'inside' information for geeks and even noobs like me. Like this What is Your Core? wall which I keep on returning to see each and every individual picture. 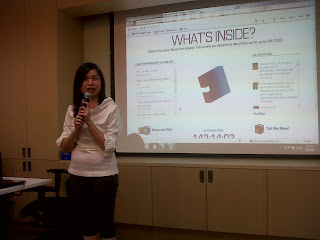 The picture on top is of Vanessa, the representative from Intel telling us the long partnership that Intel has with P1 Wimax and how far technology has come from that moment when Intel Centrino was introduced in 2003 where people can connect for the first time without wire. 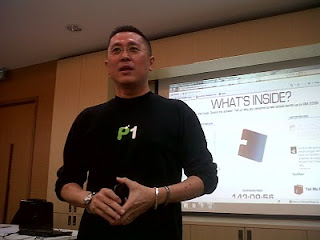 Then Kenny, the COO of P1 Wimax told his story about how far has P1 came within the 20 months they have come into existence. As someone who has an adverse interest in Green Packet, the company which owns P1, I am impressed with the commitment the company has shown to its shareholders. As they will be holding their Annual General Meeting on the same day as the unveiling of #whatisinside, I will be there to see what is in store for the company in the future. 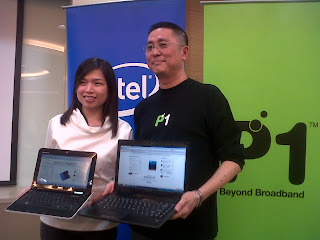 Then they did show us a bit of what is inside but we still don't know how much, how powerful, what is the package they are going to offer and how much difference these new offerings will make on the wireless personal computer market.
We can only reveal so much as we were made to sign a non-disclosure agreement which has bind us to not reveal all. What are shown above are the things that we can show. You can actually win one of the new offerings if you go to the WHAT'S INSIDE website and guess what is the name of the device inside. Follow them on twitter and get first hand knowledge what is inside. As I am invited for the unveiling in 29th June 2010, you can follow me too on Twitter.
Posted by Unknown at 12:11 AM 1 comment:

It has come to my attention of a few news in the last few weeks about people using lawyers or legal firms to conduct frauds. One is a case where a clerk in a legal firm was asked to deposit some money into an account of an immigration department officer to save her client who was caught with more money than is allowed to be carried into Malaysia. Today (17.6.2010), in a case not related to a legal firm but has the same modus operandi, a man was enticed by 'a British woman' and was asked to deposit money by an immigration officer. In the earlier case, the woman lost nearly RM20,000-00 but in the latter, the man reported the case to the Malaysia Anti Corruption Commission.
It is not a new thing for my partner and me as we have been the target of such fraudulent 'clients' since the first day of our firm's existence. Long ago, we had clients from Malaysia and foreign countries claiming to have millions of dollars to invest in various properties and businesses and all are just scams to use our firm to convince people that they are genuine. It seems that a legal firm or a lawyer can lend credibility to unconvincing stories.
Last few years, we have seen Bar Council of Malaysia warning lawyers about bogus legal firms which try to offer services and take money from the public. Other than these cases of passing off (pretending as someone you are not), legal firms are also places where people like to go and try to steal money from. We were warned just a month back that a woman is going around applying the job as an experience legal clerk, get the job, attend to clients and take payment in cash which she pocketed before quitting and taking the money with her.
That is why even in my book I ask people to check whether the lawyer or the legal firm they are dealing with is genuine or not. Just go to the Malaysian Bar Council website Malaysian Bar. They will find all the lawyers in practice with a valid license there and it is a reliable source enough as those who are not licensed are taken off the list the next day they don't have a valid license.
Posted by Unknown at 2:51 PM No comments:

A review on my book by Personal Money magazine

There is this one magazine in Malaysia which is known to write about money management for individual called Personal Money. Part of The Edge magazine group, which published the financial magazine The Edge and a few others. Surprisingly, I was approached by one of its writer as they had received my book from my distributor, MPH Distributor. I did complained once about how my book was treated by MPH which also has a sister company which owns bookstores. It seems that they are doing their job but in a more subtle way.

The review of my book was done for the June 2010 issue of Personal Money. They don't have an online magazine so I can only insert an excerpt from the magazine here. Here is a part of the review :

"The strength of the book lies in the author's ability to answer legal questions succinctly and clearly. Khairul guides his readers without overloading them. Would have been helpful if he had included a glossary"

As for a first time writer who is trying to reach out to the layman in explaining legal matters on properties, I am proud of my achievement to do so although it did say I should have include a legal glossary. That is something I can rectify if my book ever reach a second printing.

My interview was not just for the review of my book. They don't actually need to interview me to write a review on my book. The interview was actually for an article about 'The Legalities of Buying Property'. They get my view on how does one choose a lawyer, how much a lawyer charge in being of service to you and they even took one of my schedule which show the scale of fees by lawyers. Next month, in July, I was also interviewed (through email) about co-ownership.
It was great to be reviewed and I hope there are more review will be done on this first book of mine. In the mean time, as I love being tagged as an author, let me start on that second book....
Posted by Unknown at 5:21 PM No comments:

Email ThisBlogThis!Share to TwitterShare to FacebookShare to Pinterest
Labels: Books, Business, Economy, Lawyers, On Writing... (steal it from a Stephen King's book title)

It was the Relay for Life Kuala Lumpur which other than me, two of my lawyers were also there. I also dragged my wife to the event. It was held at a very muddy Majlis Sukan Negara (National Sport Council)'s training stadium. If I was still a young person, in which there were a lot of them in that event, I would have love it. The mud, the concert, the atmosphere, the staying up until 16 hours (the whole relay duration) and the people you can meet there. Fun is the key word as much as remembrance and awareness of cancer.
We have been around for quite sometime as a legal firm. 10 years is quite a long time for a business to exist and giving back to society is something which we should have done a long time ago. I would very much would like to write down the evolution of our business but that is for another blog post (maybe when we celebrate our 10 year anniversary later this year). This event was brought to my attention by a fellow blogger and well-known media person, Niki Cheong who was marketing it under a social media initiative effort.
With that realisation and with the tax deduction that was given (of course there is always monetary value for a charity event like this), we participate by more than sending a few people to the event. As any amount greater than RM50.00 can get a tax benefit out of it, we decided to give more than our usual token sum. It is not as much as those big corporate sponsor but it was enough for us to be proud to be a part of the event.
Cancer is not something any one of us had a brush with. Yet. However, there is a lot of people who had suffered it, survived it and is still fighting it. It may not be the scariest of disease to some but those who had experienced it will tell you that it is not fun either. There are a lot of other charity that we can contribute but we do pick and choose. I am one of the trustee for an environment awareness charity but it is still in its infancy. When it does need contribution, we will be at the forefront too. As for now, National Cancer Society Malaysia is just one of the charity we are supporting and maybe next year we will participate properly with a banner and such...
Posted by Unknown at 2:23 PM No comments: